What Ships Do You Sail? 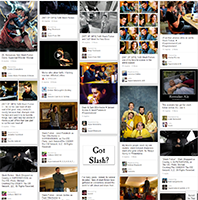 I just started my very first Pinterest board tonight. What fun!

I will be in and I love this idea but a few quick questions... Can they be a cannon pairing we ship?

@Darkestlina Sure. In the loosest definition of slash, canon pairings count. I put a few on my board already because it seemed incomplete without those ones I loved.

My pairings are all Middle Earth, and my fave pairing is Ecthelion and Glorfindel, although in my novel "Secret Agent Elve", he manages to sleep with half of th elves in Middle Earth, and a few humans, and one Maia. He does get around. :)

In the third Age, he is re-made and comes back to hook up with Sauron, the Dark Lord himself, and falls in love with him. He also reunites briefly with Haldir. But of course, his one true love is still Glorfindel.

In Valinor, upset with Glorfindel, who is now married to Thranduil (that's a nice pairing), he hooks up with Sauron again, as well as Salgant, his nemesis, Glorfindel's brother, and Lord Wolf, who is really Gothmog, the Balrog.

My other most fave pairing is Fingon and Maedhros Here are my boards:

My board is finished and up here: http://www.pinterest.com/katemmcdevitt/slash-favorites/

Here's my board. It's a lot of real person slash, because when I first started in slash, I was just aghast at the idea of people "stealing" and writing other people's fictional characters, gasp! And then I started doing it, too, and realized that if people ever wrote fanfic about characters I'd created, I'd feel very honored!