I'm burnt out on the bot right now, I've been having shitty luck with flakers and it doesn't look like it's getting better, so I'm taking a break. May start swapping again in January/February, but I will be sticking to certain groups and private swaps from now on.

I am almost always up for doing One on One swaps with other swappers! Just send a PM my way and we can go from there :) I mostly do hand-drawn Illustrations(ATC, Postcard, larger can be negotiated) but am also willing to try my hands at new things, too! Just let me know!

I'm a bit Harry Potter obsessed right now, so I'm really looking for some HP-themed private swaps! Crafty or not :)

My name is Heather. I'm 25, a mom of two rambunctious toddlers. I spent the majority of my life in Florida, but am now in Indianapolis with my fiance, while he's in school for Aviation Maintenance. I work sales at an upscale adult retailer. If you have to work, do something you love, right? I'm very laid back and open minded. Not vanilla. More like rocky road or banana split. I'm a bit of both a tomboy and a girly girl. I don't wear much makeup, only a bit of eyeliner and eyeshadow, usually only at work or a social function.

All of my hand-drawn work is original. I don't eyeball or trace. Everything I sew is hand-sewn, and I usually make my own patterns :) Most often, I use Bristol backing for ATCs and color with Copic markers. Accents are usually by gel pen, glitter pen and embossing pen.

Things you can usually find me doing are:

My fiance is an A&P student, and is currently unemployed, but looking. He likes Motorcycles, ATVs, Airplanes and most First Person Shooter Video games. My daughter is 3, and her favorite pattern is Pink Leopard. She likes HORSES(Her favorite thing ever right now), princesses and beating up her brother. My son is 2, and his nickname is Moose! He likes cars, horses, and eating. Especially eating. We're an animal friendly family who has a 37 gallon freshwater tank filled with guppies and breeding glass shrimp. We have a five month old Lab/Rhodesian Ridgeback mix and are housing an abandone AmStaff :) RIP Olive M. 10/10/2011

I like a lot of colors! Purple is my favorite right now, though Pink and Black, and Cerulean blue and Pink go very well together! Olive green and Orange, too! About the only color I don't like is Yellow.

Craft-wise, I like a lot as well! Pinups, ATC's(I don't like sticker slapping, or simply gluing a printout yanked from the internet, though), Illustrations, Giraffes and/or Bears on airplanes!, things for my family, Cryptozoology, Cats, Cattle Dogs, Big purses with a million pockets, Unicorns, Zombies, Narwhals, Repo!The Genetic Opera and Pokemon!

Movies - Repo! The Genetic Opera, Labyrinth, The Last Unicorn, Get him to the Greek, Ghibli films (Howl's Moving Castle and Ponyo are my favorites), most Zombie films, especially comedies (Fido, Zombieland).

I also LOVE Doctor Who(9-11 especially) and Red Dwarf. I like video games too. RPGs, Harvest Moon, Pokemon, DragonQuest, etc. Our household has a PS3, Wii and a DSiXl. And older systems we don't use haha!

I have an unhealthy obsession with Bic Mac from MLP:FiM. Applejack too.


You can draw cutesy animals!? Do you think we could do some sort of swap (I don't draw) for a cutesy drawing of my bearded dragon, Stryker? I can give you kawaii sticker sheet and some print fabric.


If you ever come back, I would appreciate it if you could let @Taco5518 know that you received a wishlist grant from her.


Thanks for being a member of the I LOVE Kawaii group! 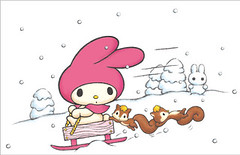 
You're gorgeous and I miss you.


Hey! You asked a while ago about the mixed up themes atc swap. I am in fact hosting another round, but in this new group. I'm not really doing any public atc swaps any more. The group is new and looking for members so it would be awesome if you wanted to join!


Thanks for the kind offer. They were all group swaps though, so I would feel bad asking for someone outside to replace them for me if they never even had a chance to join. Hope your swapping has been going well!


Thank you soooo much for the awesome ATC card you angeled for me for the Celebration of Breasts swap. I love it! The Pandas on the bra are an adorable detail. This was a really fun swap and you were a wonderful host. Cheers! <3