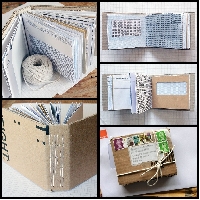 Comments copied from previous round of Naked Notebooks Swap:

vblarney: Um, just a note to USA swappers: the post office isn't required to send anything that isn't in a box or envelope and it's up to them if they want to return it to you or just trash it. Something to keep in mind!

MissThundercat: I'm sure if you seal the notebook properly with enough postage stamps on it it should arrive to its destination.

TangleCrafts: I think it's worth taking a chance! Weighing & stamping notebooks at home might save some explanations at the Post Office. I'm not in the USA so I guess the zine I send out as a self-mailer doesn't count as an example (but has always been successfully delivered to U.S. addresses) but I think @fieldstudio31 has also had success mailing notebooks previously.

Perhaps if somebody has a notebook returned to them as undeliverable, the swapper could simply then enclose the notebook in an envelope & re-send to their partner, so that the partner still gets a notebook, and sees it has had at least some dealings with the P.O., however far it has or hasn't travelled!

I realise that naked mail can get lost in transit, that's why a requirement of the swap is to scan/photograph your notebook before mailing. But part of the fun of sending naked mail is just the wondering of whether it will arrive/survive or not! This week, I received a painted woodblock from the USA, so anything is possible!

BetsyPreston: I've sent all kinds of crazy stuff, much of it to soldiers in Iraq so it had to go over the postal counter with a customs form and be accepted by a postal worker, and I've never run into any regulation that says I couldn't send the stuff. I've done this at 10+ post offices, so I'd be very curious to see confirmation if it wasn't allowed (and then I would promptly ignore the regulation and wait for the post office to enforce it).

QUESTION: can I wrap the book in string or a band of paper or the like to keep it from flapping about like a wounded bird?

TangleCrafts: I'm planning to come up with a seal of some description for my notebook, @BetsyPreston , so yes, that's fine!

Bucket: This sounds excellent - but I'm definitely nervous about figuring out how to seal the book! I'm going to give this a try today and if it works out, I'll join.

As far as postal mail in the US - I once mailed a pop bottle full of items - and I wouldn't exactly call that a box or envelope!

TangleCrafts: You could just wrap the notebook around in criss-crossed string, like a 'traditional' parcel - it doesn't take much, just to stop the notebook opening & the pages flapping about... But there are so many options, if you think creatively :-)

MissThundercat: I also wondered how to close the books, but I found the easy solutions of fun masking tape to close it. let's hope it's gonna make it to their destinations unopened :)

I do know that in the USA, they prefer no strings/twine/etc. on packages as the string can get caught in the machinery (the miles of conveyor belts and such) and cause problems.

Thanks, AmyMarie - all tips are welcome! :)

I'm seconding AmyMarie's comment about the string. It is the one thing that I have had the P Off reject. You can sew things shut, but no danglies or loose strings.

This is an example of some notebooks that were successfully mailed.

Not to mention all the zines from the mail art round robin you've been hosting in the group forum, Mandy! I'm so happy that it looks like they will all make it home safely. :)

I spent some time reading the postal regulations this morning, and it was very interesting.

Lesson Learned for this Swap: do not make your notebook more than one inch thick.

Also, blanket statements like vblarney's do not apply. The postal regulations are never that simple. If her statement is true, that means they would have to accept everything that is in a box or envelope and they will never do that either. They often accept unwrapped things, and reject boxed things. The devil is in the details.

These days one of the most important details for the USPS is "where did this package come from?" So taking it in to mail it instead of mailing it from your own personal mailbox is a good idea. Even if you stand there and affix your stamps yourself, best to get "window worker" approval.

I'm curious, @Onyx why do you say no more than an inch thick?

Due to the rigidity, they are going to have to ship using package rates vs. envelope rates anyway. I don't see how the thickness matters.

You can seal your notebook shut with that decorated Japanese masking tape (washi) It's fun and seals well, but generally will easily pull off (If nothing else, it can be cut at the seams of the notebook)

yes!! another round! i'm totally up for it and this will count towards my mailart 365 project this year ;) Like @hollycm6 said, the washi tape works perfectly well! i used it last time around as well.

Oooo, my books are made and I'm super excited to put them in the mail. I made 4 books, and test mailed two of them. So far, so good!

Cool! :) I spent Friday designing mine & they're itching to get 'out there'!

Hope you enjoy them.

Note: one of the notebooks I sent was returned to me today. I will attempt another send.