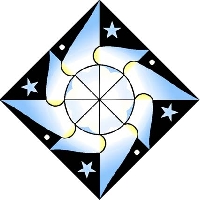 Hi Greenwoodtree, maybe you remember me from the LOTR box swap. My inspirational words/phrases are: Ancient Book of Spells, Castles, Never Ever Ever give up, queenly beauty, and the power of Love.

Music - from a harp or flute. Light - like the Morning Star Healing - from herbs or resting Hope as in I gave hope to man. Grace - as in may the grace of the Valar be with you.

Flowers such as these two: Lissuin - a sweet-smelling flower from Tol EressÃ«a, "whose fragrance brings heart's ease." Lissuin means honey blossom OR Mallos - this flower appears only once in Tolkien's writings.
Legolas sang of it thus And the golden bells are shaken
of mallos and alfirin, In the green fields of Lebennin. Its name can be interpreted in Sindarin as 'gold-snow'

Moth - the one who carried the message from Gandalf to Gwaihir

Ithilien - "a fair country of climbing woods and swift-falling streams", with gentle slopes, It is also stated that "a wealth of sweet-smelling herbs and shrubs" and a vast array of tree species grew in Ithilien, some of them having been planted by men in days of peace, and that despite desolation the land "kept still a dishevelled dryad loveliness"

Colours that I like - Green, periwinkle blue, gold/copper/chestnut brown, cream and purple

Favourite quote (one of them) "Tolo dan nan galad" which means "Come back to the Light" and is what Elrond said to Frodo after Frodo had been pierced by a morgul blade on October 6 on top of Amon Sul. I remember this because my birthday is October 6th and it sort of bothered me that Frodo was wounded on my birthday.

I do not want my partner to think that they have to incoporate all of that into an emblem, I was just giving information to help them understand more what I like. My favourite heraldic emblems in this link are the ones for Finrod, Luthien and the House of Haleth.

I'm a digital artist AND an amateur 'heraldist'. Can I send my partner a digital PSD file of the coat-of-arms / heraldic emblem I design, or should it be printed out and mailed physically?

Oh, thats awesome @Masterbard That would be ideal. I wish everyone could do that :)

I decided to try to represent my love of creating beadwork and jewelry. This sounds like an interesting swap, something I've never done before. Should be fun!

Words that define me:

Colours I love are on my profile in visual form - I can't better my description of them there, but in brief: turquoise/aqua/sage, cream/parchment, copper/brass/old metal, barnwood/driftwood

LOTR characters: I've always been in love with Aragorn and Legolas (but who hasn't?) but would probably wind up with Sam. If I were in the books, I would be Goldberry or Rosie Cotton!

When Frodo awakes in Rivendell has always been a special part of the books for me as Oct 24th is my birthday. I very much like the idea of a monochromatic colour scheme, with perhaps a dash of colour (any colour) within the design. I love The White Tree of Gondor, but my favourite place is Rohan. I also love the Valar, Nienna and Yavanna in particular.