Was MIA for quite a while! Have missed swapping quite a bit but not sure if I'm ready to get back into it again quite yet. (maybe after the holidays!). I hope everyone is doing well!

Sup. I'm Jen, and I live in Detroit, Michigan. I live with my family and all our pets (three humans not including myself, three cats, a dog and four turtles).

I'm not a religious person but I think religions are interesting, though I have no desire whatsoever to convert to one.

Also interested in feminism and LGBT/GSM related issues, especially since I don't really fit in with heteronormative culture myself. ;)

Personality wise, I can be very shy and awkward. It's always hard for me to reach out and make friends. I love to crack jokes and poke fun, and can be very dirty minded.

Hobbies I enjoy outside of arts and crafts include Minecraft (IGN is daydrifter26), other Nintendo games, baking, naps with my cat Toadie, reading, fangirling over various things.

I'm not very fashionable (tee shirts and comfortable work out pants, ratty old Sketchers). I don't wear jewelry often, but I do wear bracelets when I actually make one for myself! Necklaces occasionally. If you make me jewelry, my wrists are about 7 1/2 inches and neck is about 18 inches. I'm a big girl. :) More to love, that's all! Colors I wear most often are black, gray, red and dark blue. I'd love to wear a bracelet made with paper or polymer clay beads!

I love making things for others. That's why I joined swap-bot in the first place. It's so much fun to share my art with someone, and even better when I can cater to their profile and make them something they love!

I don't usually send extras. Sometimes I do, depending on what kinds of things my partner lists on his/her profile. When I do include extras, it's not because I'm trying to get a heart. I do appreciate hearts, and I like to hope that when I get them, it's because of the effort I put into a swap. I hand draw and paint most of my swaps, or try to include hand carved stamps if I stamp something. Hand made, original, unique items are what you will get from me!

Also note that for tags and wta's, I usually send handmade items like ATC's or hand carved stamps. In postcard swaps, I almost always send handmade pc's rather than store bought.

I always rate when I receive, and if I don't get your swap in a reasonable amount of time, I will communicate with you. Likewise, if you don't get something from me, or have any issues with the swap whatsoever, please let me know so we can fix it.

I don't smoke, but I live with people who do, so I can't tell if my things smell like smoke or not. So far I haven't had anyone complain, but I also tend to do my crafting in my bedroom or the craft/extra room, where no one smokes anyway. I also own cats, and will do my best to prevent cat hairs from getting in the packaging or on the swap item(s) itself.

My Art: I love to draw, paint, bead, carve stamps and make paper dolls. I love polymer clay but haven't had the chance to play with it in a while. Lately I have been enjoying paper doll making. I always use bases I designed myself. My newest design is a pin-up style witch. Will post to Flickr soon!

Drawing and Painting: I love to draw people, especially original characters. For some reason I am drawn (lame pun) to female forms. I'd say my style is influenced heavily by animation, both western and Japanese. I hope to improve my skills, because I'd love to make a webcomic someday.

Beading: I primarily do bead weaving, like netting, peyote, brick, herringbone...sometimes I will do simple bead stringing or wire techniques, it depends on the project (and how much time I have! beadwork can be very time consuming). 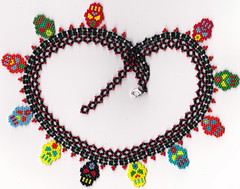 Polymer Clay: I don't get to work with this wonderful material as often as I'd like, since it requires a little more preparation and time than other things. I mostly make beads, and am planning on making ATC's and inchies in polyclay. My favorite brands are Kato Polyclay and Sculpey, which I usually mix together. Never tried Cernit. Don't really like Fimo much.

Autumn is my favorite season. Gourds, Halloween, falling leaves, pumpkin pie baking in the oven! I just love this time of year!

STEAMPUNK! And gothic/dark and punky sort of things. Lolita (gothic or otherwise).

I'm fine with nudity and a little naughtiness, though would prefer not to receive adult themed images on the outside of envelopes and on postcards. I'm secretive, sh!

Not a fan of kawaii, receiving or sending it. I don't hate it, but it just doesn't do anything for me.

I don't like raisins, hot tea or coffee. Well, I do enjoy iced coffee if it's loaded with sugar, chocolate and whipped cream (mmmmm!) but I doubt you can mail iced coffee. :(

I have no allergies to speak of, and I live with both cats AND smokers, so smoke scent and animal hair is no problem, I'm used to it. :P

I want to thank those who have so graciously given me extra things, it's very nice of you and I am grateful! I cherish my gifts. :)

I love to read but don't read much, partly because my local libraries suck, mostly because I'm lazy.

A Song of Ice and Fire: Tyrion, Sandor Clegane, Brienne, All the Sand Snakes are some favorite characters :)

I love Stephen King, especially The Dark Tower series. There are some beautiful illustrations in the books as well.

I'm a big Harry Potter fan, though I dislike the movies. Voldemort, Snape, Lucius and Luna are my favorite characters.

Also a fan of Lord of the Rings. I've read The Hobbit, and plan on finishing The Silmarillion. Galadriel, Elrond, Treebeard, Gimli, Aragorn, Boromir, Faramir, Theoden are some favorite characters.

Currently in LOVE with Once Upon a Time, American Horror Story: Coven and Game of Thrones!

Big lover of sci-fi, supernatural, horror and comedy. Not too crazy about chick flicks.

Other favorite characters include:

List will be updated because I fangirl a LOT :D

My favorite games ever include Metroid, Super Mario Bros 3, The Metroid Prime Trilogy, The Legend of Zelda: Ocarina of Time (and each Zelda game for the consoles after that to save space :P), Super Mario Galaxy, Super Mario Bros Wii, Mario Kart Wii, Mortal Kombat: Deception and Tales of the Abyss.

I don't really understand my own taste in music. Maybe someday, someone else will. Have a list to get an idea:

For how to post links, pics, etc: So You Wanna Trick Out Your Profile


Sweet! Looking forward to it. Have a very Merry Christmas!


Great to see you back! Would love to do an atc swap with you when you are ready to start up again.


Hi! I just drop in, because I have created a swap what may interest you, please check it


ps, just creeped your flikr and your ATCs are awesome! Thought you might be interested in this new group :)


Hey there! I was wondering if you're ever planning on hosting another round of the original fantasy map swap. It was one of my favourites I've done! If you aren't hosting right now, would you mind if I hosted something similar? I would love to add another map to my collection!


Thank you so much for the BEAUTIFUL ATC's for the "Make and ATC in my favorite theme" tag! The skull one is AMAZING! Thank you so very much! I love them!â™¥â™¥â™¥â™¥

Thanks for being a Crafting Queen~


So glad your ATC made it safe and sound. :D