I love nature and the outdoors. My husband and I try to go camping at least once a year (preferably more often than that), and we have kayaks we take out regularly as well. I greatly enjoy hiking in the mountains and I'm fascinated by the wildlife one can find there. I do love the beach/ocean as well, though.

My favorite season is Fall. Watching the trees change color is always fun... but not as nice as smelling the woodsmoke of your first fall bonfire.

My favorite holiday is Halloween (I'm told I have a slightly gothic tendency at times), and we usually throw a big costume party for our friends each year.

ALLERGIES -- To my knowledge, I have none!

I've been crafting in my spare time for years, and my interests in that realm are pretty far reaching.

At the moment we have only 3 pets. Juniper, Al, and Nickledemus.

Juniper is an 'all-american mutt.' We think she's a mix of... well, we have no clue what breeds. She's a small/medium sized puppy that we found at a shelter adoption event in late summer of '09. She's the first dog I've ever owned and she's won my heart.

Al is my leopard gecko. Would you believe she was a yard-sale find? Her owner was moving to CA and couldn't take her with, so I gladly adopted her. She's been mine for 9 or 10 years now.

And last, but certainly not least, is Nickledemus. He's my dumbo rattie! He is a beautiful silver-pearl color, and he's been living with us for almost 3 years now.

Black is a good favorite with which to start. After that, I prefer cool colors with deep blues and greens being my favorite. Anything ranging from an indigo verging on violet to a vivid leaf or fern green color.

However, I do love the colors of autumn. Bold or deep reds, oranges, and yellows are wonderful when mixed... a memory of autumn and flames.

Bold colors always thrill me. I tend to shy away from pastels, but they have their uses, too, from time to time. I don't particularly like pink for much of anything. I do not like neon colors or colors/patterns that look like they belong in the 70s.

I tend to prefer silver over gold where metallics are concerned.

My favorite crafts would probably be nearly anything dealing with fabrics (sewing, batik, quilting, etc) crocheting and digital photography.

Forever and ever, 'The Crow' has been my favorite movie. Along with it, though, I present to you some other favorites:

'Edward Scissorhands' (Pretty much anything by Tim Burton is an instant favorite. Oh, and almost anything with Johnny Depp, too.)

'Shaun of the Dead'

This will be another tough one as I like a wide range of music.

I grew up listening to folk music ranging from Pete Seeger to John McCutcheon, with a bunch of other things in the mix. I also learned to play the fiddle so I could join in my parents' jam-sessions with friends.

Other, more specific include:

Halestorm, Massive Attack, Orbital, Evanescence, Skrillex, Midnight Syndicate (mostly for Halloween purposes, but fun to listen to at any time when you're in a dark mood), Nine Inch Nails (I prefer Reznor's older stuff, though... i.e. Halos 2, 5, and 8), Aerosmith, Mumford & Sons, The Chieftains, Enigma or Enya (for when I'm in a quiet mood)

This list will be under occasional modification as it barely begins to scratch the surface of my interests, music-wise.

I'm hazarding a dangerous subject for me... Books. Once I get started on this topic, it can be hard to stop me.

Let's start with genre. I prefer Science-Fiction and Fantasy with a heavy emphasis on Cyberpunk. I also enjoy a good Horror or Thriller novel from time to time.

Maybe I should just list 'wild animals in general' as this favorite. Here are a few at the top of my list (real and mythical): 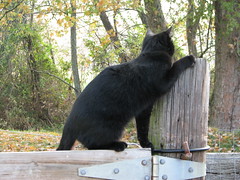 ... of the seemingly Random Variety!

If you have any questions, please don't hesitate to drop me a note and ask. I truly appreciate when people take the time to try and tailor their swaps to meet their partner's profile. I know I have a tendency to ramble, and what I've said may need clarification... Don't hesitate to ask!

May you all have a great year and enjoy some truly amazing swaps!

To the Nuts for Sewing Group

Aside from my being quite a bit older than you (I'll be 40 in a couple weeks) you and I have quite a bit in common! blessings, Gypsy

Welcome to Fallen Angels. I hope that it's a group you'll enjoy being part of.

Just doing the official bit. Hope the fest was rocking!!!

Yay! another rattie lover! Awww that sucks losing so many babies :/ It's devastating losing just one. Basil! Cool name. Have you ever saw fawlty towers? We'll have to sort out seeing pics of the cool dude :D Ooh how do basil and kitty get on? Oh what lizard? i want one. maybe a gecko :)

"Anansi Boys" and "American Gods" ? Nope not yet (sheepish face) I'm a bad Gaiman fan!!! I've got the older collections about the endless but i'm dying to read the above. especially American gods as I've heard so many good things about it!

I like symphonic myself and yeah, Nightwish rule (with Tarja). I haven't bothered with them since they binned her to be honest. I do love haunting melodies and a female voice carries that of so well. I don't know if you have heard of Cradle of filth? They have (and had) the most wonderful female vocalist and it just made the songs.

Hehe I ramble all the time, it's fun!

yeah all thats confusing isn't it? I'm off to bed with a good book and your more than likely just finishing your cornflakes (or lucky stars or something lol)

I've replied your message about our swap, hope it helps.

Oh, on another time, I must discuss your more of your authors and stuff, and what it's like to be a children's librarian/specialist. Sounds cool. I've wanted to be librarian/bookshop owner. Cool working with kids because their imagination is so free and wild anyway.

Well hope you have a good, erm, time whatever your doing today/night/week :]